Can Peli Cases Hold Up to the Rigors of the Dakar Rally?

The following is our story about a group of cousins that traversed North Africa on motorcycles equipped with Peli cases, emulating the Dakar Rally riders of yore along the way.

Before getting into the story, a little background. The Dakar Rally, formerly known as the Paris-Dakar Rally, is an annual long-distance off-road race that has been held since 1978. Originally the rally went from Paris, France to Dakar, Senegal, but has been held in South America since 2009 due to security risks in some of the countries along the rally’s original route from Paris to Dakar. Being that the race is an off-road endurance event, the terrain that the competitors cross is much tougher than that of your typical rally. Competitors must cross dunes, mud, camel grass, rock and erg, among other types of treacherous territory.

We only got into motorcycling a few years ago and the idea of going on a cross-country Dakar Rally-esque trip across the Saharan Desert was not something we took lightly. It was an ambitious plan, but an endeavor we were all ready to undertake. Given the potentially perilous nature of the Dakar Rally, the vehicles usually used are true top-notch off-road vehicles. Unfortunately for us, we didn’t have much money, so we went with the cheapest bikes on the market; old Honda Africa Twins from the Dakar Rally’s golden era of the eighties. To prepare ourselves for what was to come, for months we spent any spare time we had studying the mechanics of our new motorcycles and prepping the bikes for the trip, which was to begin in Morocco and follow the old Dakar Rally routes.

It goes without saying, for a trip of such magnitude, we needed to be able to rely on our bikes, but we also needed to be able to rely on all the equipment that we brought with us. Thus, the luggage holding our equipment was vital, so Peli cases were of course a no-brainer. Luckily, we were able to find a set of second hand Peli 1550 cases to take with us on our trip. Although we didn’t have much money, going with old Peli cases over other cheaper, newer options was something we will never regret. 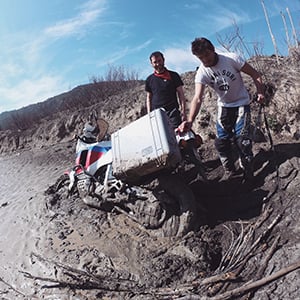 We went through a lot during our trip as we traversed the Sahara Desert, traveling through water, sand and mud, over rock and asphalt, often falling off our bikes along the way. While our aluminum cases were getting heavily damaged fall after fall, the Peli 1550’s showed little to no sign of damage and most importantly protected the gear inside from bumps, dust, mud, water and humidity.

In the image, you can see one of our Africa Twin motorcycles, just after our cousin Louis landed in a massive pool of mud. The thinking was that going at full speed through the mud would let him fly across it to the other side. Needless to say, that didn’t happen. We ended up laughing a lot and struggled for a few hours to get it out of the mud, but in the end we succeeded. As we checked on everything in our Peli cases, which included food, clothes, a sleeping bag, spare motor parts and even a drone, we found that everything was perfectly dry and protected. However, the idea that any of the case contents would be anything but perfect never even crossed our minds.

One ocean, four women, one fight