Under the Pole: Exploring the oceans like never before!

It is said that earth’s final frontier is the ocean. 70 percent of Earth’s surface is covered by water, yet only 20% of the seafloor has been mapped or observed. As a result, it is thought that the ocean is less understood than the moon or Mars. So little is known about the ocean twilight zone, the layer of water below the ocean surface just beyond the reach of sunlight, that there is no telling what lies beneath and what is yet to be discovered.

Enter Under the Pole, a French exploration crew, which has embarked on a 3-year expedition of the ecosystems of the ocean twilight zone at all latitudes. Under the Pole’s goal is to help scientists to better understand the oceans and to promote the importance of environmental protection. 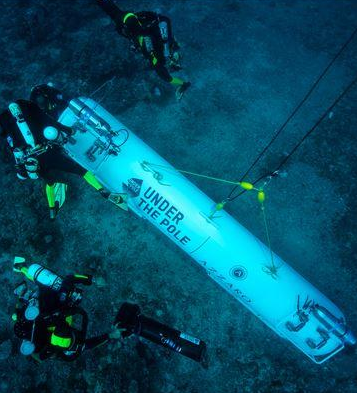 At the forefront of underwater exploration and innovation, Under the Pole explores the oceans like never before aboard their ship WHY. The WHY is an expedition ship; a robust aluminum schooner designed to navigate in seas around the world, from the tropics to the polar regions to even the ice caps.

“Our objective is to participate in the protection of the marine ecosystem through the development of innovative diving techniques and to share our expeditions and their findings with the general public,” states Under the Pole.

Since 2010, the crew has carried out two expeditions in the Arctic, during each of which they completed a combination of scientific, documentary and educational projects.

“In the summer of 2017, we completed the Northwest Passage, studied underwater fluorescence and species inventory. And in June 2018, we were in Polynesia studying coral in mesophotic areas (50-150m under water), with our underwater capsule that revolutionized the way we approach saturation diving,” says Under the Pole.

Saturation diving is a diving technique that allows divers to reduce the risk of decompression sickness when they work under water at great depths for long periods of time. PELI’s job has been to provide valuable protection during this portion of their previous expeditions. Their next mission will take them to Moorea, French Polynesia, from August to December 2019. PELI cases will aid the project’s logistics and provide waterproof protection for their numerous diving tools as the crew dives to great depths. Three divers will live and work underwater at saturation for several days, allowing continuous sampling and observation of the fauna – flora environment.

A whole world beneath the waves awaits discovery and PELI couldn’t be more happy to be a part of it.

What is Information Technology and Why is it Important?

How does Biotechnology benefit humanity?