In this post, we investigate what seismology is, how it plays a role in saving lives all over the world by examining the events of natural disasters such as the volcanic eruption of Cumbre Vieja as well as how Peli helps seismologists.

As some of our readers will know, Peli Products has its corporate headquarters located in Spain. One of the major news stories in Spain recently was the volcanic eruption of Cumbre Vieja on the island of La Palma in the Canary Islands.

From 19 September to 13 December 2021, an eruption at the Cumbre Vieja volcanic ridge terrorised the island. For months residents grappled with earthquakes, ashfall and noxious gases that engulfed the island. Fortunately, the authorities in the area were able to take the necessary action to evacuate the affected areas of the island and keep everyone safe. Nevertheless, the effects of the monthslong eruption were immense.

Over 7000 people were evacuated as the lava flow covered over 1000 hectares. A hectare is an area that is equivalent to 10,000 square metres. The lava flow is 3.5 km at its widest point and 6.2 km long forming an entirely new peninsula on the island. In its wake, the lava flow destroyed more than 3000 buildings and completely destroyed the town of Todoque.

By Christmas day, the eruption was declared officially over. Of course, La Palma’s newest headache is what to do with all the ash. Nonetheless, given the magnitude of the eruption, it’s incredible that zero lives were lost directly connected to the eruption. This is largely down to the swift action that the local authorities took to get residents and tourist visitors to safety. And for this, we have to applaud the job of not only the local authorities, but also the science that enables us to know just when and how to avoid lost life from these types of natural disasters.

The eruption of Cumbre Vieja began on 19 September; however, the first seismic events began on 11 September with an earthquake swarm. An earthquake swarm is a sequence of seismic events occurring in a local area within a relatively short period of time. More than 22,000 earthquakes were recorded during the week before the first eruption. This gave the authorities in La Palma ample time to plan and evacuate those most in danger.

Based on the events of Cumbre Vieja, the role that seismology plays in saving lives from these volcanic natural disasters is evident. However, seismology’s benefits to humankind extend much further, including other life-saving applications. Having said that, what exactly is seismology and what tools do the scientists that practice seismology use?

As you might imagine, seismology is simply the science of studying earthquakes. A branch of geophysics, those that practice seismology, the scientists, are called seismologists.

According to Encyclopaedia Britannica, seismologists’ investigations have goals that may be local or regional, as in the attempt to determine subsurface faults and other structures in petroleum or mineral exploration. They may also be of global significance, as in attempts to determine structural discontinuities in the Earth’s interior, the geophysical characteristics of island arcs, oceanic trenches, or mid-oceanic ridges, or the elastic properties of Earth materials generally.

More recently, there has been significant devotion in seismology to the prediction of earthquakes and to assessing the seismic hazards in different geographic sites with the goal of risk reduction related to earthquakes.

One need only think back to recent earthquakes that occurred in Italy in 2016, which resulted in significant loss of life partly due to the presence of structures that were not built to withstand significant seismic events. Seismology’s role in both predicting earthquakes and assessing seismic hazards allows for the reduction of risks associated with earthquakes by either reinforcing vulnerable structures or constructing entirely new earthquake-resistant structures.

Traditionally, the seismograph was done on paper with ink, but these days, this has largely been replaced with digital versions.

Seismographs are installed in the ground throughout the world to record the motion of the ground during seismic events and they are operated as part of a seismographic network.

How are earthquake sizes measured?

Measuring the magnitude of earthquakes is done using various different scales; however, the most well-known is perhaps the Richter scale.

Charles Richter first developed the scale to measure earthquake size back in the 1930s. Although this was, pardon the pun, ground-breaking at the time, it became apparent later that the Richter scale was a bit limited due to its validity being limited to certain frequencies and distance ranges.

However, even these newer magnitude scales have their limitations. Thus, a more uniformly applicable extension of the magnitude scale was developed known as the moment magnitude. This scale, especially for larger earthquakes, gives the most reliable estimate of earthquake size.

According to the United States Geological Survey, moment is a physical quantity proportional to the slip on the fault multiplied by the area of the fault surface that slips; it is related to the total energy released in the earthquake. The moment is estimated from seismograms. The moment is then converted into a number similar to other earthquake magnitudes by a standard formula. The result is called the moment magnitude. The moment magnitude provides an estimate of earthquake size that is valid over the complete range of magnitudes, a characteristic that was lacking with the three previously discussed magnitude scales.

As one might imagine, a seismic station should be insensitive to ambient noise sources, both human and environmental, as possible. This is so that the sensitivity for earthquake generated signals is high. Thus, it is imperative that these stations be installed as far away from humans and oceans as possible. This means that seismic stations are generally installed in remote areas, which requires a housing that is both easily transportable, but also impervious to external weather inclemency. 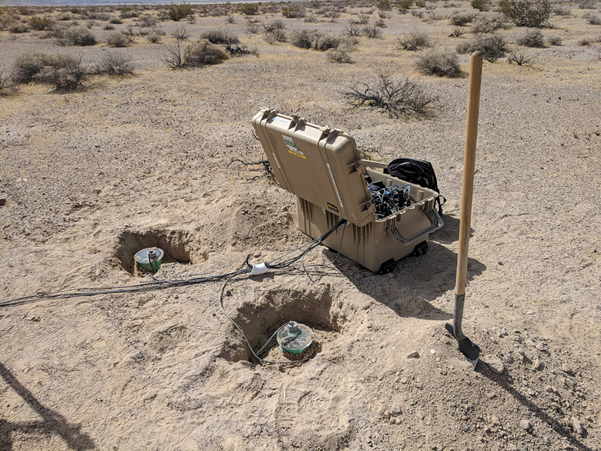 Image courtesy of the USGS

Peli Products designs and manufactures the toughest, high-impact resistant, dust proof, chemical resistant and IP67 watertight cases for extreme protection. Equipped with ball-bearing wheels and a telescopic handle, Peli cases are not only highly protective, but also perfect for transporting sensitive equipment to just about anywhere you need your equipment to go.

To learn more about how Peli cases can help you, click on the button below to download a free guide.