Winter Olympics: What is Biathlon?

With the XXIV Olympic Winter Games on the horizon and our very own Peli Pro, Julia Simon, competing, a post about her chosen sport seemed like it could be a good idea to cover. Given that the name of the sport indicates that it is a combination of two sports, you might think that the two sports would be similar or testing similar disciplines, such as the triathlon, which combines running, swimming and biking and largely tests endurance. Biathlon on the other hand is a little different.

Biathlon is a sport which combines both cross-country skiing and rifle marksmanship. Although it may appear to be a peculiar combination, this is also part of what makes it so interesting. In this post, we cover biathlon, its history, and the current biathlon events at the 2022 Winter Olympics.

To understand the seemingly peculiar combination of marksmanship and skiing, one must look into its history. The sport seems to have arisen out of an affinity for both skiing and marksmanship from northern Europe, and specifically a reverence of the Norse God, Ullr. Although the history on this deity is a bit murky, he is thought to have been one of the most prominent figures amongst the Scandinavian gods in the early Viking Age. When we’re talking about the early Viking Age, we’re referring to pre-Christianity here. Back when the years were negative. For context, two of the most famous Vikings in history, Erik Thorvaldsson, or more popularly known as, Erik the Red and his son Leif Erikson, were sailing the North Atlantic Ocean and discovering Greenland and North America around the 10th-11th centuries AD. And for those fans of Ragnar Lothbrok, he was invading modern-day Scotland, England and France back in the 9th century AD.

Thus, as you might imagine, there isn’t much known about Ullr, as literary attestations of the Norse God are sparse. What is known about him is that he was an excellent archer, hunter, skater, skier, and not to mention, handsome and warlike. Thus, biathlon is rooted in the skiing traditions of Scandinavia that were past down through the generations from the early inhabitants of the area who revered Ullr and his skills.

The origins of the biathlon competition are thought to have developed by various militaries in the region. Dating back to the Great Northern War (1700-1721), Swedish and Norwegian militaries were recorded as having battled with ski units that were equipped with rifles.

It wasn’t too long before the first recorded biathlon competition took place in 1767 between military patrol units along the Norway-Sweden border. The sport was thought to provide both valuable training but also provided great recreation, or in other words, people had fun.

In 1861, the first biathlon club was founded in Norway named the Trysil Rifle and Ski Club, and thereafter many similar clubs were established all over northern Europe.

The first biathlon world championship was instituted in 1958 by the Union Internationale de Pentathlon Moderne et Biathlon. And finally, in 1960, biathlon was added to the Winter Olympics as an official men’s event. However, it wasn’t added as a women’s event until in 1992.

Now we can get into the specifics of biathlon and the various events and variations of the sport. The competitors in biathlon, ski on a cross-country course equipped with a specially designed 5.6mm (.22 calibre) rifle. In most events, competitors are required to fire from both standing and prone (lying on their belly) positions. Depending on this position, the target size is different. While standing, the target is larger at 11.5 cm in diameter, while in the prone position, contestants fire at a target of 4.5 cm in diameter.

The International Biathlon Union (IBU), that has governed the sport since 1993, recognises six types of biathlon events. These are the individual, sprint, relay, pursuit, mass start and team. At the Olympic Games, there will be 11 events, five men’s events, five women’s events and one mixed team event.

Who is Julia Simon?

Julia Simon is a biathlon competitor for the nation of France and also happens to be a Peli Pro. She recently anchored the French Mixed Relay to a IBU World Cup victory in Poland in 2020. She will be participating in the Olympic Games 2022 in Beijing representing France. 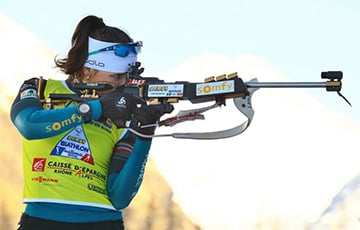 Julia is also a massive fan of Peli Products and our cases, stating recently that, ““Peli Products help protect my rifle, which is essential! I use the PELI 1720 case and it ensures that my rifle is safe on journeys, thanks to its robustness.”

You can follow Julia's progress at the XXIV Olympic Winter Games in Beijing here.

Peli cases are the toughest, high-impact resistant, dust proof, chemical resistant and IP67 watertight protective cases for extreme protection on the market. If you’ve a rifle or any other piece of delicate equipment, a Peli case is probably the right choice for you for strange and transportation purposes. To learn more about how Peli cases can help you click on the button below to download a free guide: