What to consider when choosing a tactical torch

In this post we will cover what a prospective buyer of a tactical torch should consider before purchasing, such as what the torch will be mainly used for, performance indicators according to the ANSI performance standards as well as the various features and functions of the torch.

Contrary to what people may think, a flashlight can be a fairly complicated tool. Thus, many things should be taken into consideration before purchasing a flashlight. For some people, a regular run-of-the-mill flashlight that turns on and off will do the trick. For others, a safety-approved explosion-proof ATEX flashlight might be what they need, especially if their line of work puts them in potentially explosive atmospheres on a regular basis. And for another group such as the law enforcement officer, military professional, outdoorsman or simply the everyman, the tactical flashlight is perhaps right in their wheelhouse.

For those unfamiliar with tactical lights, we covered tactical lights in a few previous posts. In the first we defined what exactly makes a flashlight tactical. We encourage you to take a look back at that one if you need a refresher. In a second post, we covered the uses of tactical flashlights and how to use them. In this post we will cover what you need to consider when purchasing a tactical light, such as what you will be using it for, as well as some of the performance indicators, features and functions of the light.

What are you going to use it for?

After you’ve considered what it is you need a flashlight for and if you believe a tactical light could be the right type of light for your needs, you’ll want to consider the various ANSI performance standards of each light at your disposal to make your decision.

The American National Standards Institute (ANSI) developed performance standards and symbols to effectively communicate a flashlight's features and benefits. These are the first things you will want to consider in terms of functions and features. 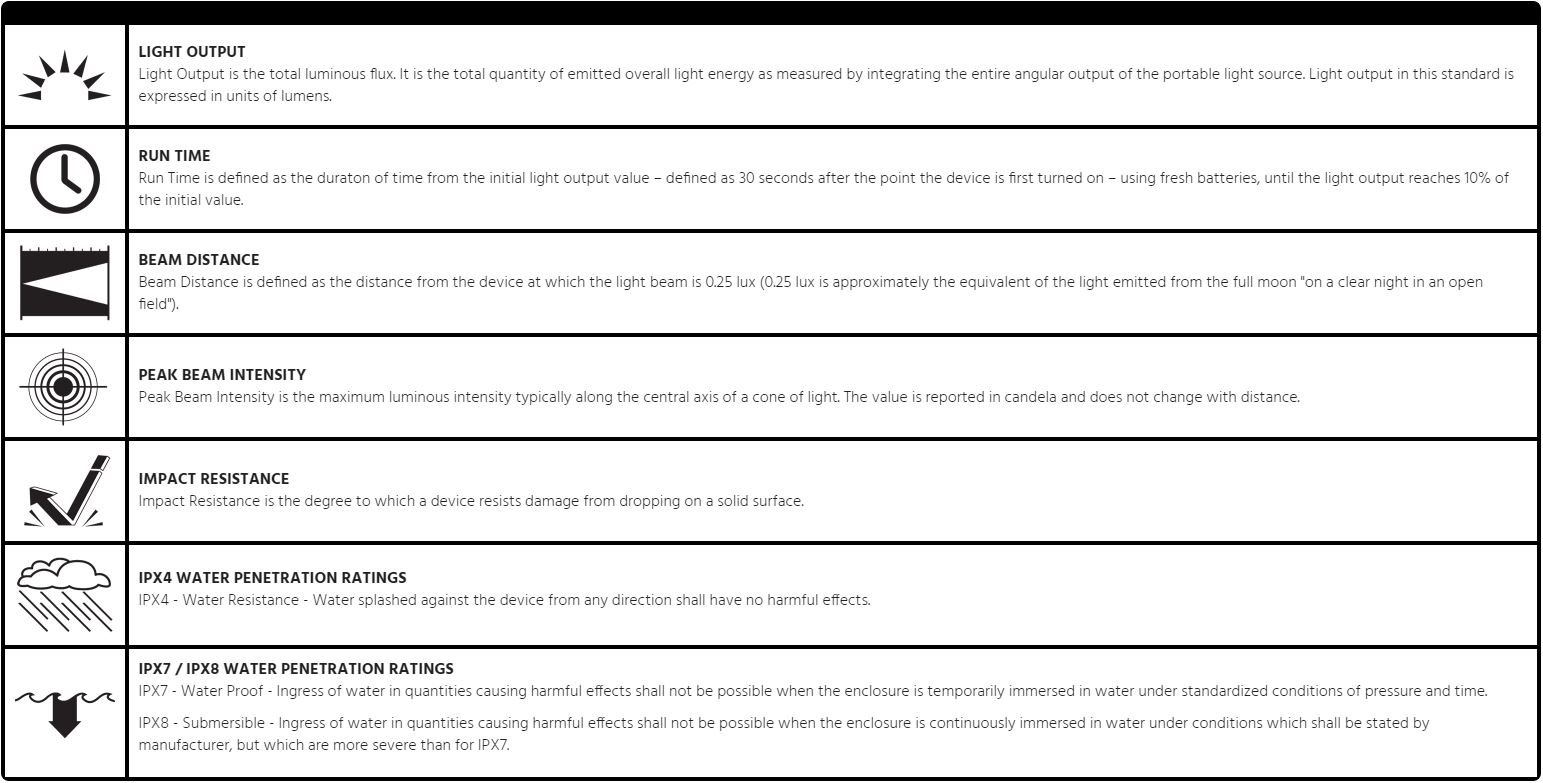 The tactical light is always going to be a very powerful light given what it has been designed for and for whom. Having said that, light output, or brightness of light, is measured in something called Lumens. Lumens are a measure of the total amount of visible light to the human eye from a lamp or light source. This means that generally speaking the more lumens, the brighter the flashlight. Anything above 100 lumens will usually do the job, but many if not most tactical flashlights these days are approaching or exceeding the 1000 lumen level, meaning they’re extremely bright.

Having said that, you’ll want to consider how bright you really need your light to be. One thing to consider is light run-time. The brighter you have the light, the less time it will run before it runs out of battery. Most good tactical lights will have various brightness settings which will allow you to toggle between low, medium and high modes. Each mode will have a different lumen level, and thus you will be able to conserve battery running it on a lower power mode level.

Another measure of the power of a light, but perhaps overlooked is the Peak Beam Intensity. This is the maximum luminous intensity typically along the central axis of a cone of light. The value is reported in candela and does not change with distance.

Essentially, what this means and measures is the light intensity at the brightest point along the beam.

Just to clarify the difference here, lumens and candela are simply two different ways to measure the output of light. Lumens will measure the total amount of light emitted by a torch while candela measures the amount of light emitted by a light in a particular direction. Typically, the lumens measure will be all you need, but to cover all your bases the Peak Beam Intensity measured in candela is also something you may want to consider.

The next thing you’ll want to consider is beam distance. Assuming you are using your tactical light at night, the beam distance for example will be measured by how far the light will shine before it diminishes to the equivalent light of the moon. Logically, this distance of the beam will vary depending on the aforementioned brightness setting you have the torch set to.

This may be something to consider if you are planning on carrying the light with you for self-defence as this will allow you to shine the light farther, able to disorient an assailant from a farther distance away. Likewise, a greater beam distance may be useful for a marksman or outdoorsman to light up targets far off in the distance.

Also mentioned previously was the run-time. The run-time is measured in hours and is calculated by taking the the length of time it takes for the light output to drop to 10% of the rated output on new batteries, rounded to the nearest quarter hour. Usually, the run-time will be measured by brightness setting. Again, the brighter the setting you have on the tactical light, the less run-time the light will have before it runs out of battery.

One thing to keep in mind is that tactical lights were designed to be used for law enforcement originally. A typical shift for a police officer can be over 12 hours long, thus a tactical light will need to make it an entire shift without running out of battery. Another way to say this is that any good tactical light you find will have a pretty long run-time.

Impact Resistance is measured in meters and is tested by dropping the light onto a concrete surface with all accessories and batteries installed, from a specified height. In order to be considered impact resistant at various heights, it must be 100% functional after the drops and be free of any cracks or breaks at each height tested.

Depending on the impact-resistance rating of the tactical light you may be considering, if could mean the difference between a short-term investment and a lifelong one.

Tactical lights are often needed to be used outdoors and as a result sometimes the elements such as water, sleet and snow will be present. A tactical light will therefore need to be resistant to water. There are various levels of water-resistance by the Ingress Protection (IP) ratings system and you’ll want to consider just how much protection you will need.

Learn more about the ANSI standards and symbols here.

Additional features and functions to consider

In addition to the ANSI standards for performance, there are additional features and functions of tactical lights you’ll need to consider as well.

The lamp type as you might expect is the type of bulb that the torch uses. Although there are many different types of lamps, the advancements made in LED technology over the last few years has rendered other lamp types almost obsolete. A good tactical light, therefore, will almost always be equipped with an LED bulb (or bulbs) due to its energy efficiency, run-time capacity, impact resistance and brightness level.

Rechargeable lithium-ion batteries are also very common. Usually they will be able to be charged by USB. As batteries seem to be one of those things you never have when you need them, the rechargeable battery option may be more attractive and save you a few impromptu trips to store to buy batteries urgently.

The tactical flashlight will usually be equipped with various operation modes. These will usually include a momentary-on option and a constant-on option. Momentary-on means that the user should be able to depress the button slightly to turn it on, but then let go to turn it off. The constant-on option, as you might imagine, is when the button is depressed completely until there is a click and it stays on once released.

The strobe mode is often a feature of a tactical light that allows the user to have the light rapidly turn on and off. This is handy in a multitude of situations, often in those of self-defence. The rapid on and off of the light causes a person or object on the move to appear in and out of sync and it can take the brain a while to adjust to that. This is also known as the Bucha effect or flicker vertigo. Thus, this gives the light user time to take an action in self-defence.

The last few things you’ll want to consider are the materials that the light is made out of as well as the length and weight. The materials used to construct the light will largely determine its durability, but it will also determine how heavy it is, which depending on what you need the light for, may be a determining factor for you. Length, as well, is something that will determine weight and again, depending on what you need it for may be a determining factor in your decision.

There is a lot of consider, but don’t fear, Peli is here

Having said all that, as you can see from the above, a flashlight, although it may seem a fairly straight forward tool, is anything but that. In that case, it is very important that if you are considering the purchase of a tactical light you consider your options.

Something that can help is speaking to an expert on tactical lights to better make that purchase decision. Luckily for you, Peli Products has developed some of the most diverse, tough and smartest tactical lights to hit the streets. If you would like to speak to a Peli representative, click on the button below to contact us.

Additionally, you can have a look at our full line of tactical lights to see what Peli has at your disposal.