The Spanish Route on the Nameless Tower: The Preparation (by Pedro Cifuentes)

It was not the first time I had abandoned a route. How could it be otherwise when I have been climbing around the world, maybe on some of the hardest walls, for the last 15 years? 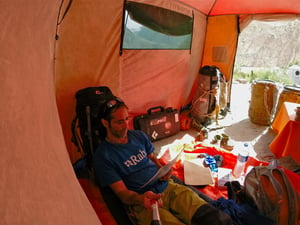 I have had to flee from some of them in the middle of Patagonian storms. From others, let’s just say it wasn’t the day. And from this one on the Nameless Tower, because what I saw puzzled me.

Never, not even in my worst nightmares, could I have imagined that what was supposed to be the easiest part of the route would reject me. With just one-third of the Spanish Route climbed, I had to come down because I didn’t want to die in a transition section. What should have been “2 pitches of snow edge and snowfield” as Miguel Ángel Gallego had told me, was in fact a filthy accumulation of loose rocks; a house of cards that would collapse if a single card was removed. When I checked if what I was seeing was true, my right shoulder intercepted the first rock! What was I doing there? Was I were I was supposed to be? Was I wrong? Why? This was not part of my plans.

Basically, the thing is that I didn’t want to climb a route everybody climbs. On Eternal Flame or on Slovenian, you know what to expect, as they are equipped. They are perfect routes if you aim for the top, but not if you aim for adventure. I feel their beauty and respect their history and tradition, however, at the moment, they didn’t trigger me, even solo climbing. For some people, solo climbing in such a place is irresponsible. However, from the same point of view, for me, the main difference is that climbing there with a partner is doubly irresponsible. 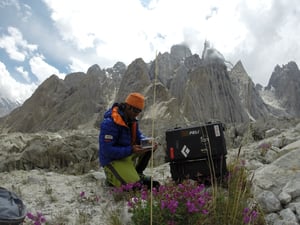 Not long after finishing the Three Towers of Paine Traverse, I decided the Trango Towers would be my next objective. I was also looking for a first repetition. Adolfo Medinabeitia told me about La Piola, which he had tried. I had initially chosen it, but then I found out that a French team had just repeated it. It wasn’t for me. On the other hand, the Spanish Route had just spent 25 years on its own since Miguel Ángel Gallego, José Seiquer, José Luis Clavel and Chiri Ros opened it after 18 days of bad weather conditions.

Together with what I knew or suspected, some explanations from Miguel Ángel and an outline written in his own hand convinced me: 1500m, the longest route of this wall on the Tower, free, artificial and icy. Acceptable for my purposes.

No need for hooks, copperheads or microstoppers. It could be faster than La Piola. In this sense, Miguel Ángel, a discoverer of awesome routes, saw it as “a good balance of prudence and audacity”. I hoped so.

Again, I trained as hard and consciously as the 6257m Tower would require. Solo climbing means a double or maybe triple effort. I was aware that lifting my haul bag up to 5000m would be a difficult challenge only achieved with a good acclimatization programme. Doctor and runner César Canales advised me and he introduced the bicycle in a further aerobic training plan. Apparently, running makes your heart stronger but biking makes it stronger and bigger which is perfect for acclimatization. Soon I was ready. But the attempt seemed doomed from the beginning...