The Spanish Route on the Nameless Tower: The Attempt (by Pedro Cifuentes)

(...) The days before my scheduled flight to Islamabad were complicated due to the recent bombings and increased insecurity in Pakistan, which made some teams cancel their expeditions. The lack of insecurity I felt in the capital vanished when I reached Skardú. From that point I only met good and very good people. Good people and impressive mountains.

Up to 3500m, right opposite you some giants of 6000m, makes you feel really tiny. It is like being in Vega de Urriello and admiring Tres Picus one on top of another.

Already adapted and alone, I finished my portage through the risky 1000m corridor of the Nameless Tower. As on most mountains of this kind, first strategy and later speed and luck play a key role. I began the first part, the first 500m carrying 20 kg, plus 3 camalots sets and all my hardware. Its crags were full of sand and moss just like a field of potatoes. I used the nut tool for cleaning and I also protected the route. It took me more time than expected. Some steps of free climbing between 6c and 7a (difficult to say), some A3 and mainly 6b and A2. It took me 5 days in capsule style with a 300m-long rope to reach the top of the bedrock.

At first, I didn’t understand anything. Where was the snow? Maybe a stone avalanche had turned the Big Traverse into a dump too vertical to be passable. I didn’t think so. The Nameless Tower looks the same as it has for the last 25 years, except for the huge crack. It took me much longer to know what could have happened.

Was it all covered with snow when in 1989 the Spanish team went over? Probably. They had very bad weather conditions, with snowfalls 15 out of the 18 days of their expedition. The weather was really nice when I was there, warm even, maybe another impact of climate change. 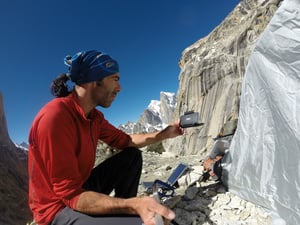 There should have been snow, but there wasn’t any. This quarry with an angle of approximately 75 degrees, hidden from my field of vision, was testing all my experience. If you didn’t touch it, it looked so calm that it almost invited you in. Only two movements and the first rock in my hand caused a chaos in me. A chaos I would not want to experience again. While rappelling the Holth route as I descended the Towers of Paine, I suffered two avalanches, but I didn’t have a choice. Here, I would have to think over it.

I tried to rest and to think. Such an effort, the support of so many people… and I have to turn back home because of some subjective evaluations. Maybe someone else could have gone though it but, how? How would I drag my sack? With snow cover, this wouldn’t have been a problem. Maybe with a colleague, one could lift the sack and the other could clear the way. However, if there was a stone avalanche, it would have been the end for both climbers. Doubly irresponsible. I went up and climbed again. I checked again and I went down again.

When one pulls out in the middle of a storm, the joy of being alive is much higher than the feeling of failure. But here, I was crestfallen. I left all my stuff and rappelled. I could get the equipment another day. At base camp, Alex Txikon, Pelut and Carlos Suárez cheered me up. Something was clear for me: on such a route, 80% of climbers fail, some of them do it and some of them die. I climbed and checked again. This time, I was part of the 80% group.

Did I fail? I don’t think avoiding something suicidal can be a failure. Did I do something wrong? The strategy, food, material… I think they were all well chosen. There was something about the mountain that I didn’t know. Now, I know it and I will have a second chance. “Only as a warrior can one bear the way of knowledge. A warrior can’t complain or regret anything. His life is an endless challenge and there’s no way challenges are good or bad. Challenges are simply challenges”. Castaneda helps me to understand the message: you make a decision, you try and you succeed. Or maybe you don’t succeed; it is in the trying that the warrior feels good about himself.