One of the key features of a Peli cases is that they are waterproof and dustproof. You can put anything into a Peli case and know that it will be safe against the intrusion of objects such as liquids and dust. This begs the question, though, how is the level of said protection measured? The answer to that question is Ingress Protection ratings. In this post we will briefly go over Ingress Protection Code and its various ratings.

What is Ingress Protection?

The Ingress Protection Code, also know as simply IP Code, is a ratings system developed and maintained by the International Electrotechnical Commission, which is an international standards organisation that prepares and publishes international standards for electrical, electronic and other related technologies. IP ratings are used to rate the degree of protection or sealing effectiveness in enclosures against the intrusion of objects such as water or dust.

The IP Code comes in a standard format with the letters “IP” followed by two digits, each corresponding to the level of protection against solids and liquid ingress.

As stated previously, the first digit in the IP Code indicates the degree of protection that an enclosure provides against the ingress of solid foreign objects as well as the level of access to hazardous parts such as electrical conductors and moving parts.

Also discussed above, the second digit indicates the degree of protection that an enclosure provides against harmful ingress of liquids such as water. 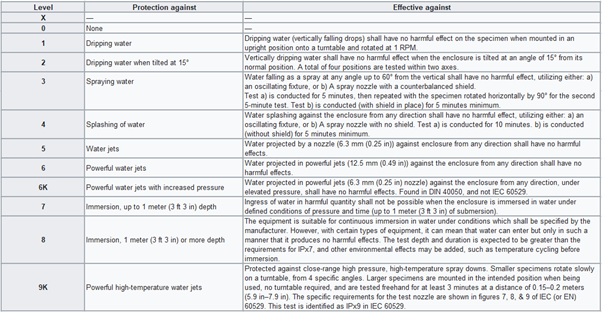 What does Ingress Protection have to do with Peli?

Peli Products is the global leader in the manufacture of both high-performance cases and advanced lighting systems. Peli cases, which are the ideal solution to accommodate all types of different equipment due to it’s IP67 rated watertight and dustproof enclosures. Additionally, they are highly impact-resistant and can take repeated drops, blows and have even been known to be able to withstand the weight of a car without being crushed.

In addition to Peli’s cases, Peli also produces a wide range of impact-resistant lighting products, such as torches, headlamps and work lights. The vast majority of these lights are rated according to the Ingress Protection standards from IP54 to IPX7, meaning they are all watertight and in some cases also dustproof, so you’ll never have to worry about working with your Peli light into the harshest environments.

To find out more about Peli’s cases, click on the button below to download a free guide.

Likewise, if you’d like to know more about Peli’s lighting products, click on the next button below to get a free guide on Peli lights.