From Frozen Arctic To Humid Amazon, Advice And Experiences From One Of The Best Wildlife Photographers: Thorsten Milse

An artist engaged in the defence of endangered animals, Thorsten Milse has been awarded several prizes including the Grand Prize Winner at Nature’s Best Photo Competition and the prestigious Award BBC Wildlife Photographer of the Year. With international recognition, he has exhibited in Europe and in the United States. Read his wise advice and learn about his adventures in quest of the most unique wildlife species!

I see animal photography as a kind of calling. I find animals and their behaviour very interesting. And it makes you very contemplative and also a little sad how nature is disappearing and we are seeing the extinction of species. A lot of the time we put economic interests above everything else and forget that we cannot survive without having some nature intact.

Of course, as a photographer, you go to fantastic places, travel a lot, learn a lot about other cultures and about wild animals. When putting together a photo reportage, I feel like an adventurer, always ready to react in a flash to a subject, because the scenery is gone in the blink of an eye.

How did you get started?

In the Nineties, I was a graphic designer working for an advertising company and tried to spend at least a few weeks a year on photography. Then, suddenly, in 1999 I was made redundant. It was the push I needed to take the plunge and become a freelance photographer.

At that time, I was with eight different agencies! Now the agencies work together online, so you can be with just two or three. Approaching agencies is one route into the business, but contracts are hard to come by, so don’t expect earnings from agents to start immediately. Start by looking at what’s been published the past few years in GEO and BBC Wildlife.

As always, the alarm clock rings at 4:30, and I leave my accommodation before sunrise to go off in search of the subject of the photo reportage. Time flies, because you want to have the subject in the viewfinder when the first rays of the sun start to appear. You try to cover as many perspectives as possible with different focal lengths and "ready to shoot cameras". Then breathe deeply and hope to capture other scenes in the best light.

Then in the late afternoon, it starts again and you hope for great scenes. Unfortunately, the sun usually sets far too quickly, in the blue hour you can take some photos these days with the ISO settings, but often only LED light or flash helps at this time. But usually you have to leave the National Parks in the dark. Then a cool beer and a relaxed dinner await you, to make new plans for the next day.

Over the years I have had a lot of interesting encounters and photo situations, but certainly the photographs of small polar bears are among the most dramatic experiences in many aspects.

The thermometer was showing -42°C, and a cold wind from the north was blowing across the Arctic. It was in the north of Canada, in Wapusk National Park. It was February and I was in an area where polar bears let their young go and leave the caves to hunt ringed seals on the pack ice.

There was a polar bear mother with her twins sitting on a snowdrift. After several hours you get cold even when you are wearing the thickest possible down clothing, a storm mask and using a lot of accessories, such as heat pads. The wind chill factor makes it feel like

-60°C or lower, my feet are cold despite wearing really thick shoes, which made it look like I had landed on the moon. From time to time, I sit on my PELI Case 1600 to relax my cold muscles a little bit, but all the while I keep my eyes focused on the polar bear and her young. The Canon equipment is positioned on a Sachtler carbon tripod and also exposed to the cold; it works slower, but technically it's 100%. You have to avoid metal parts and if you do use them, you have to make sure you are wearing gloves, otherwise you will freeze to them.

Finally, just before sunset, the polar bear stood up, and climbed over the snowdrifts with her young following her. A photo shows all three in a symmetrical position, even if only from behind, but that makes it an unusual but very exciting photo. The position I chose was perfect. A few meters left or right would have given a different perspective, but only this position could have given this special photo. 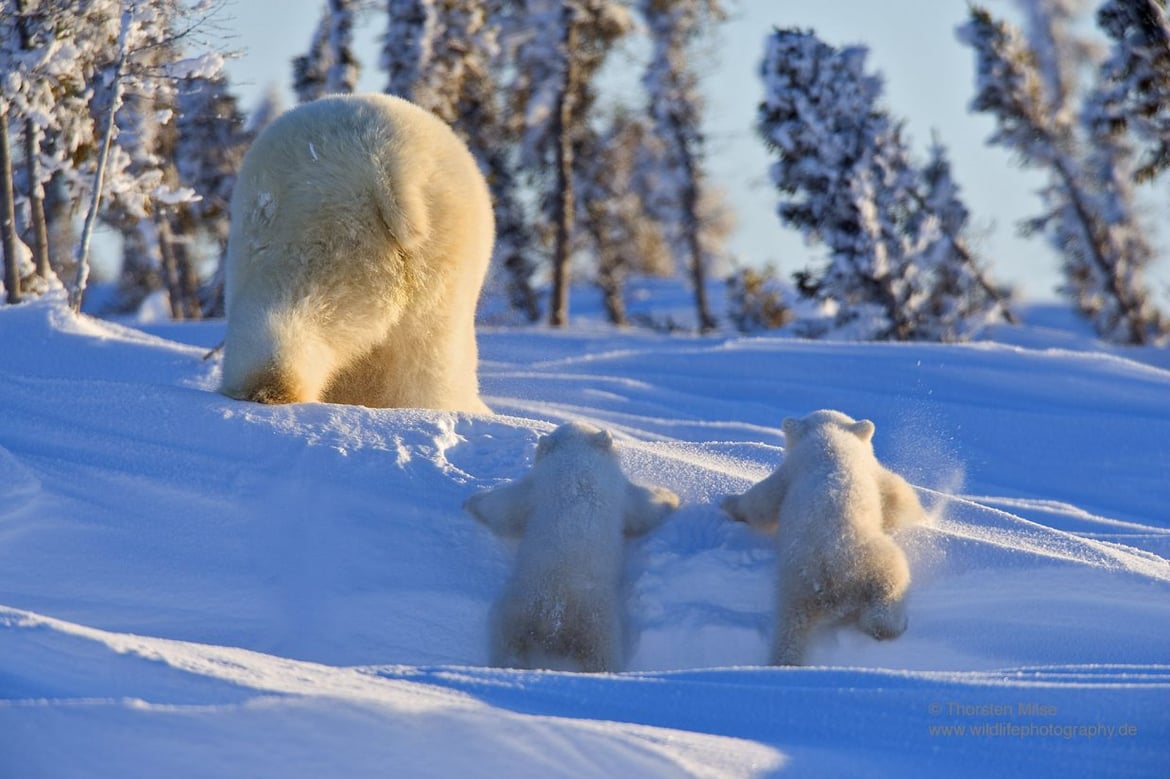 Nowadays, photographers and cinematographers take more with them than in the past. Video has been added and the list of accessories has also expanded.

My second piece of main luggage contains a Sachtler Speed Lock tripod, monopod and private things. Sometimes I also use a drone and/or a Beetlecam. In that case, I’ll take another PELI Air Case 1605 with me as excess luggage.

How do PELI products protect your kit? Which ones do you use?

Whether it's cold or dusty, I like to use the PELI Air Case 1615 so I can fit two Canon EOS-1D X MKII bodies with a 600 mm and a 200-400 mm. The equipment is protected from any environmental influences. For example, if I am on a boat, the equipment won’t be damaged even if we capsize. The equipment is always ready for use and can be accessed quickly and easily.

It's practical because you always have somewhere to sit, even if you have to wait a long time. In addition, in the Arctic, for example, there are high-temperature differences between outside, where it can be -50°C, and inside, where it can be more than 20°C. The equipment would otherwise inevitably be covered by condensation, so the functionality of the cameras could not be guaranteed and the lenses would fog over as a result. So it’s better to remove the batteries and memory cards and leave the equipment well protected and safe in the PELI Case in the cold.

But also, in areas with very high humidity, such as the Amazon Jungle, everything has to be packed air and watertight. Otherwise mould would spread after a few weeks and even small temperature differences would cause fogging. So, it's essential to use a PELI case to ensure I always have functional equipment.

What advice would you give someone who is seeking the same line of work?

Tips on becoming a wildlife photographer: When you first start out try to maintain another source of income, ideally a part-time job or one that allows you to take several weeks off at a stretch.

Keep on top of all the stories in the big nature magazines, such as Geo and National Geographic. Look for locations or animals that haven’t been covered for a while or develop a new angle on an old story. The same applies to the book market.

Consider the different levels of interest in particular animals based on how popular (e.g. polar bears, tigers, monkeys, penguins) or rare (e.g. snow leopards) they are. But remember that what the magazines and book publishers find interesting might not be the same as that of the agencies.

Specialise as much as you can. It’s better to cover one or two animals or areas of the world well than several adequately.

Enter the big photo competitions such as BBC Wildlife Photographer of the Year, Nature’s Best and World Press Photo.

What's your next adventure?

Next, I’m going back to wintry Japan. There I’ll be on board a ship for a few days to photograph Steller's sea eagles on the ice. Cold, salt water, strong winds - all elements that require special protection for the equipment. So, I’ll take my PELI Air Case along with me again. Other targets are the red-crowned crane, the whooper swans at the hot springs and the well-known snow monkeys, whose habitat is also in a whirlpool in a secluded side valley in Nagano.

Meet The Man Behind The Machine: Carlos Solano, official HRC mechanic for the Dakar Rally