Buy something that will look good and last forever

To celebrate the arrival of our brand NEW PELI Air Travel cases, we decided to publish this independent review on PELI Air cases by, Simon Van Booy.

Watching luggage drop onto the belt at any international airport is fascinating.  The first to arrive is usually something aluminum plastered with orange “Priority” stickers.  Then comes everything else, and it’s frightening. I’m not just talking about battered cardboard boxes wrapped with rope (remember Gremlins?), but 1970s paisley — the style equivalent of asbestos. And let’s not forget vintage pleather luggage with buckles and zippered sides where your clothes slump to the bottom, giving the impression your suitcase got pregnant en route.

The modern luggage nightmare appears as a small, hard-shell case in the most unnatural color — perfect for something that will take 1,000 years to biodegrade. This type of luggage takes many forms: pink with white polka dots, green with brown clouds, or some city skyline printed from a low resolution photo, with an accompanying message, such as, “Always Smile” or “Victory is the Goal — Determination Gets You There.”

My personal favorite, and perhaps the most frightening item to ever grace the airport “runway” is the plastic shell “honeymoon” suitcase — another bulbous exoskeleton customized with the image of a couple (again, low-res) barefoot on a beach exchanging vows, or mid awkward-laugh as they feed each other morsels of cake.

Up to now there have only really been two options for luggage. Buy something so beautiful and expensive that you’re too worried about it being stolen or damaged to enjoy your holiday; or, buy something that sits chained up outside the dollar store because the people who work there are afraid of going blind if they have to see it everyday.

And before you mention it — your grandma’s vintage Gucci and Louis Vuitton is useless without modern TSA locks, as you either have to check it unlocked or find a tiny, doll-sized padlock that fits and can be cut off by the TSA inspectors. (As an aside, it’s worth mentioning that Trunki wheeled toddler luggage that you can ride on is perhaps the best thing I’ve ever seen. It’s not only a suitcase, but a mode of transportation, and a little friend in the form of a tiger, prehistoric buffalo or ladybug.) 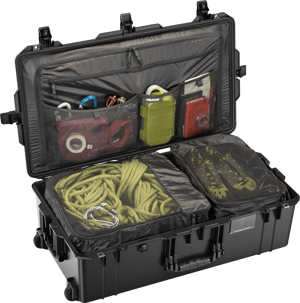 This is why I’m here to tell you about Peli cases, which in my opinion are the best option if you intend on checking baggage (instead of dropping it on people’s heads as you cram it into the overhead bin). After extensive research earlier this year, I purchased Peli’s 1615 Air Case for a reasonable price. And after several months of extensive travel, I’m fairly certain I’ll never have to buy another suitcase for the rest of my life.

If you’re wondering why you haven’t seen one before, it’s probably because you’ve never kayaked 81 degrees north through current-driven Arctic ice-packs, or changed a wheel in the scorching Gobi dessert, with only your Peli 1615 Air Case to use as a jack. Although I don’t do any of those things either, I’m involved in the extreme sport of staying up all night during the work week to research random things on the Internet (like luggage), watch videos of monkeys play the piano and frighten myself by reading about rare diseases caused by lack of sleep.

The typical Peli customer is probably not a member of any frequent flyer programs — they are emergency medical personnel, military operatives or marine ecologists like Dr. Michael Townsend, who was sailing in Kaipara Harbour when his Peli case went overboard. Townsend figured he’d never see it again, as the west coast of New Zealand is known for being rugged with massive swells — a merciless marine environment.

A month later, however, he got a call. Someone had found it washed up on a beach coated in barnacles. Townsend said his Peli would have been pounded on before being dumped on the beach. As a marine ecologist, he also knew it had been floating around for most of the month it was lost, by the size of the goose barnacles. He also knew the case had spent most of its time with the seal below the water line. Despite this, everything was dry, and the phone inside worked perfectly.

On the Peli website there are countless other “survival” stories written by loyal customers. They involve Tsunamis, small airplanes crashing into the sea — even blocks of C4. In other words, there’s nothing baggage handlers could do that would even come close to compromising the strength of a Peli case.

Constructed from a super-light proprietary polymer, the Peli 1615 is the maximum airline check-in size and has a retractable extension handle, in addition to three handles around the lid — so the case can be easily hauled onto a taxi roof-rack, or loaded onto a boat.

An ‘Automatic Purge Valve’ keeps water and dust out while balancing air pressure, and there’s a clear plastic business card holder for visual identification, should the case float away like Dr. Townsend’s did. Five clips clamp the lid to give the 1615 a watertight seal, but one of the best features is how the case is locked with independent TSA-approved cable locks, which come in different colors and cost five bucks each. This means you’ll never have to dump a suitcase again because of lock issues.

One problem of most modern suitcases four-wheel suitcases concerns the ease by which wheels break off. Peli avoids this issue by having only two wheels. Some people may posit that four crap wheels are better than two unbreakable ones. International airports — especially in China — are enormous, and dragging the 1615 on two wheels takes a little effort. Nevertheless, you'll never have to worry about Peli Travel Case wheels coming off.

One thing to mention is that due to the case's sleek design, it is not exactly discreet. At London’s Heathrow airport, instead of going on the belt, it was wheeled by two very polite security officers, who assumed I was transporting something exciting, and needed to see the accompanying paperwork. They laughed when I opened the case to reveal the usual toiletry kit, gifts for relatives and pajamas.

But with an attractive price point and virtually indestructible composition, the 1615 is certainly practical for the civilian traveller. In my opinion, however, what makes it such a stylish piece of luggage is that conveying status played no part in its design, which — given Peli’s history — I assume focused on making something that would transport just about anything in extreme conditions. It’s style, then, lies in what it is … not what it implies.

Find out more about Peli Air Travel cases by clicking on the button below.

This article originally appeared in InsideHook.

What Types of Foam does Peli Use?

What is the engineering design process? How does it work?