Discovering landscapes below the earth’s surface has been a major part of Roberto Garcia’s life for many years. He sheds light onto these dark and unknown places to give us a glimpse into the enchanted world of caves with his beautiful photographs.

Hello Roberto, you are a photographer who's passionate about taking photos below the earth’s surface in impressive caves. How did this passion start? Was there someone who introduced you to speleology?

My passion for speleology started in the late 70s when I was only 16 years old. Some school friends started going to the Atapuerca caves close to Burgos in Spain where I used to live. We went there by bus on weekends which made me passionate about discovering new places. I was a boy without the awareness of dangers. My passion for the subterranean world got me in contact with veteran speleologists of the Niphargus group. They teached me how to make maps of caves, climb down ropes and simply how to explore the world below the surface which I liked in particular.

By publishing those explorations with my teammates in magazines motivated me to learn subterranean photography techniques. In 2006, I gave up exploring caves and chasms to fully focus on taking photographs of the subterranean world. Years passed and I became a true speleologist who had explored thousands of caves and hundreds of kilometres of subterranean galleries.

You are the co-founder of the Espeleofoto Association. Could you explain what the association does?

The Espeleofoto Association was born in 2006. The idea came up when my friend Lorenzo Sáez and I were taking photographs in a cave. We wanted to share these photographs so that everyone could get an impression of how the inside of a cave looks like. The idea of creating www.espeleofoto.com arose- A window to the world where we show our cave photography. 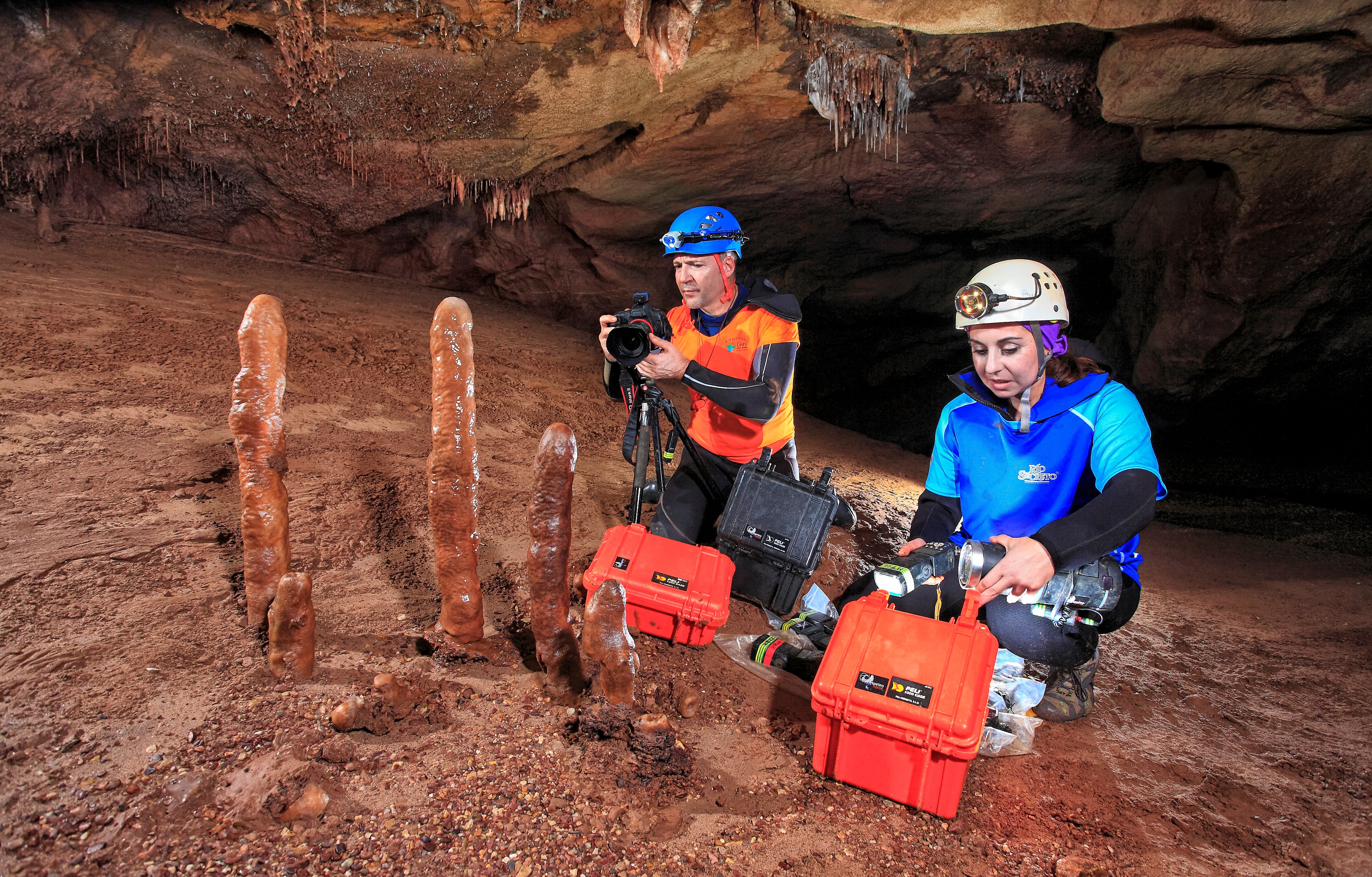 The Espeolofoto Association focuses on cave, chasm and mine photography. We take 360º photographs, film 360º videos and give subterranean photographs courses. In 2016 we organised the Speleo Photo Meeting in which 100 people and photographers of 11 countries participated. We have already published some illustrated books and have contributed to articles in magazines and online ones too. The association also realizes photographic reports in tourist caves. With our images, we want to raise awareness for a very special and not much accessible natural environment that has to be preserved.

How do you prepare yourself/ the team when you do an expedition to a very deep cave?

In order to take photographs in caves it is necessary to be in a good physical condition. You need long lasting experience and should know how to move in caves and chasms where you have to overcome certain obstacles, such as blocks and slippery grounds. Ascent and descent techniques and a good insurance is also important in case an accident happens.

The speleology is a sport science that is realised in groups. Consequently, having a team which a good group dynamic is essential. When we make a photographic expedition in a cave, we look for information like the exact location of the cave, how it is and what we might find inside. We study topographic plans of the cave to find the most beautiful places for taking photographs.

In the next step we have to prepare all the material - individually and collectively. Ropes, transport bags, photographic material, our Peli Cases and food for 8 to 10 hours. We must take into account that it takes more time if the material must be carried around lakes, rivers and narrow places.

What equipment is essential when you go on a trip? What do you store in your Peli and which one do you use?

For us photographers, the essential equipment is our photographic cameras and the Peli cases where we transport and protect our cameras, lenses, flashes, batteries and Led spotlights in. We use the Peli 1300 and 1400 as it’s not bulky and perfectly suitable for the conditions inside the cave. In an ordinary expedition 2 or 3 photographers are taking the shots who are assisted by 4 to 5 people each to help them with lightning etc. 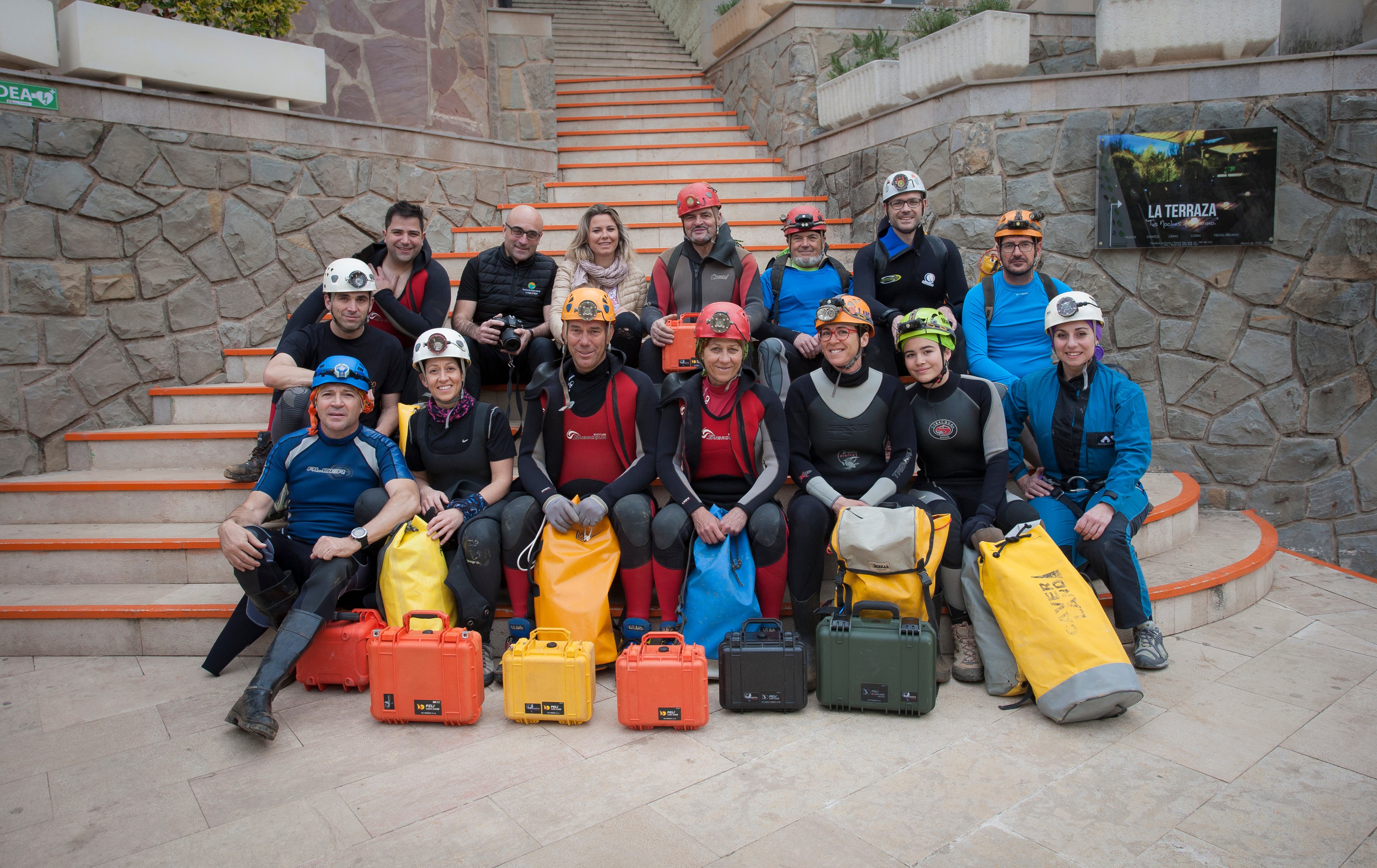 When talking about surfing or climbing most of the people can imagine where popular spots are for these kinds of adventure sports. It is a little bit different for caves, I suppose. Can you name a real Eldorado for cave addicts?

The speleologist collective spreads out all over the world and so do the caves. We have catalogues of caves depending on their depth and their development. We also know the mountains and the places where there are more caves and chasms. Everything is published on books and webs. The new caves that people explore are added to this information.

Our expeditions are concentrated in the north of Spain, in the Cantabrian mountains due to the proximity with the area in which we live in. This area is incredibly beautiful with limestone mountains - It’s a sanctuary for the speleologists. We can find chasms deeper than 1.000 meters, or caves with a development of 150 kms. Sometimes we organise expeditions to caves in the south of Spain where we can find very special caves, such as the Sima de la Higuera which has a thermal origin or the Pulpí´s geode. Spain is a great country for speleologists and it’s recognised all over the world. We have taken images in caves in Romania, Mexico, France, Portugal and Italy.

Is there a cave that is most memorable to you?

I have visited a lot of caves in 40 years. All caves are different and some of them are fantastic. For me, one of the most I enjoy taking photographs, is El Soplao in Cantabria, Spain. It is 25 kilometres long and it has a mine which is 20 kilometres long too. The cave and mine weave together and form an incredibly big maze. The special aspect of this cave is the aragonite formations, called eccentric. They are like gardens with white rocky flowers, a fascinating thing.

The big vertical pits of Castro Valnera in Burgos, Spain are up to 195 meters deep. I explored many of these pits in the 80s and 90s. I have always been fascinated with how the water has dissolved the lime-filled rock forming these abysses with cylindrical sections. To descend these big pits is a great experience, and even more if you are the first person doing that.

What's the deepest point you've been to in a cave?

The highest depth that I have descended was in the Hayal de Ponata system (Álava - Burgos, Spain). There I reached near 500mts deep, in a cave that has about 90kms of galleries. I have also explored caves with bigger development such as Ojo Guareña in Burgos, Spain, that is 110kms long. Obviously, exploring a cave like that, with that depth and development, requires many years of experience and a very important human team.

What are the biggest risks if you go in a cave and have you ever experienced a critical situation yourself?

The most important risk is not to get lost. Usually, speleologists are trained people that orient themselves very well. If you are exploring and drawing planes it is impossible to get lost, because you become the best knowledgeable about the cave. The biggest risks are to slip among the blocks, a falling rock hitting you or the swelling of rivers in caves that cuts off your way back. 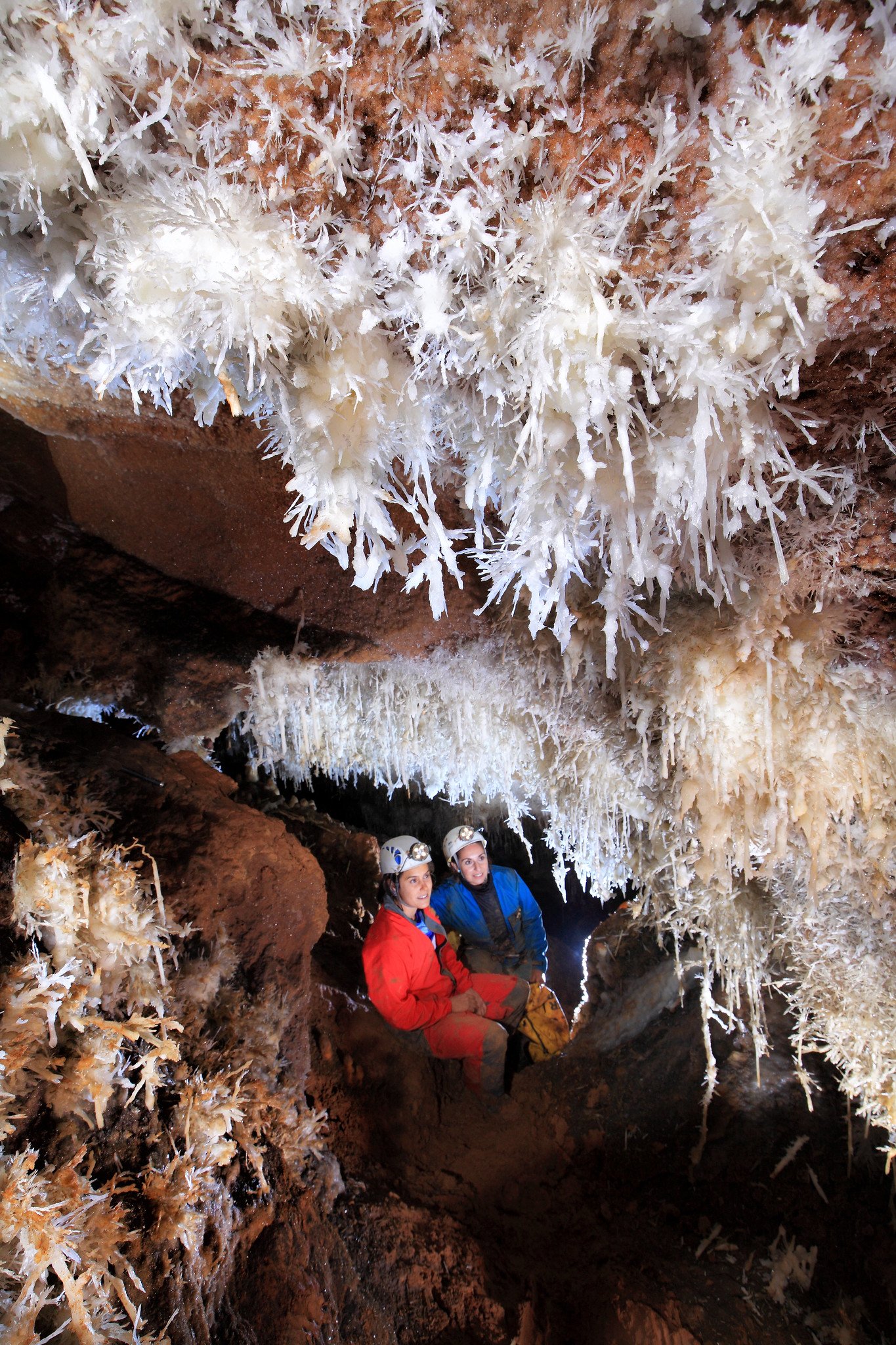 The most critical situation I have experienced was a water rise. Many years ago, we were drawing the plane of a cave, when suddenly, water started to run down from the cracks on the walls. We decided to leave quickly, but when we arrived at the river zone the current was already very strong and some sections of the gallery were totally submerged. It was impossible to go out. We had to wait hanging from the ceiling of a gallery about 8 hours until the water level descended. The reason was an unexpected summer storm. It was a completely new experience for me, and since that day, I prefer not to go into caves in which these kinds of situations can occur.

What are the challenges regarding taking photos down there in complete darkness?

Taking caves photographs is not an easy issue. There are millions of people that take landscape pictures but only one thousand photographers are taking pictures in the subterranean world. Photography in caves is truly team work. You need people who help you with the lightning, to pose as a model, to carry all the material, and sometimes, to install ropes in order to move around the cave. The photographer has to choose the spot he wants to take the photograph at without much light. Mud, water, humidity or dust could easily destroy the photographic material but our Peli cases keep them safe. They are our best allies and we have been relying on Peli cases for years now. It is complicated to take good photographs, but with good friends and a reliable photographic equipment, it is possible.